…..Presidency allegedly offers £75 per head bribe for all pro-Buhari protesters

In what seems like a plea that ended in deadlock, President Muhammadu Buhari supporters have emerged in Abuja House, London for a ‘pray for Buhari” protest as an anti to the #HarassBuharioutoflondon protest which started on 1 April.

The protest which is been organized by former presidential aid to Goodluck Jonathan, Reno Omokri, was according to the organizer to stop President Buhari from accessing his medical check up, which he had gone to London on Tuesday last week.

However, as the Federal government have seen the consistency of the #HarassBuharioutoflondon protest is continuing without any end in sight, ransom was offered to the organizer Reno Omokri. 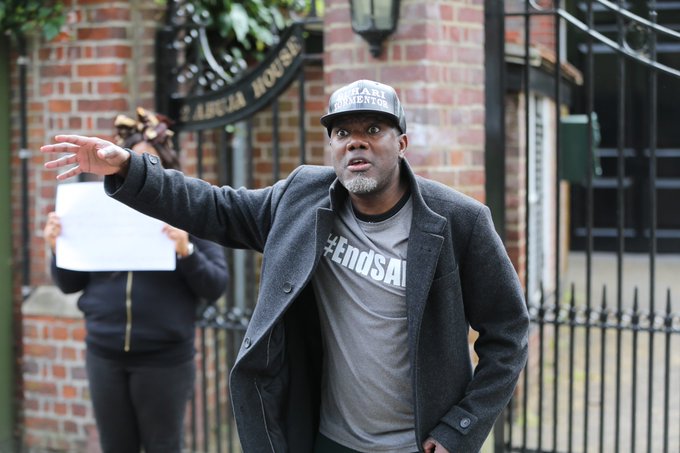 Nationalwatchng, gathered that following the rejection for negotiation and ‘name your’ amount plea from men in the presidency to Reno Omokri, the presidency resolved to organize a pro-Buhari protesters.

The pro-Buhari protesters, Nationalwatchng gathered were been organized by the London Chairman, All Progressive Congress, APC, Dr. Philip Idaewor. The pro-Buhari protesters with inscriptions such as “Pray for Buhari” are saying that the Buhari government is doing enough for the country and should be allowed to access medical care for which he went to London. 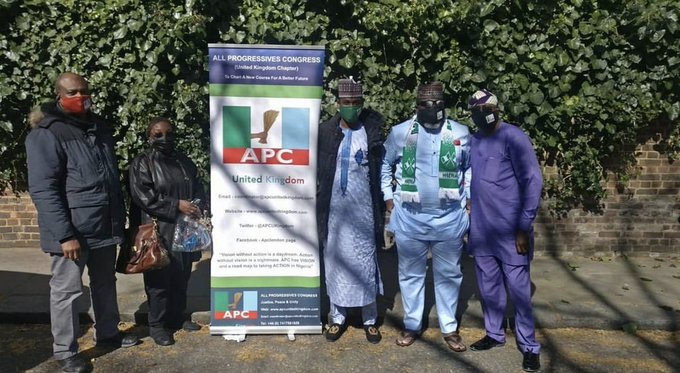 But the organizer of #HarassBuharioutoflondon, Reno Omokri, argued that if Buhari has done enough for the country as said by the pro-Buhari protesters, it boils down to the reason why they are protesting, that the President Buhari, should go back to Nigeria to access the medical care from the best hospital he built in the country.

Nationalwatchng, obtained a reported criticism of Dr. Philip Idaewor, the leader of of the pro-Buhari protesters in London, in October, 17, 2020, in which he lamented the poor budgetary allocation to health care and education by Buhari regime, while billions of naira are been budgeted for the National Assembly. 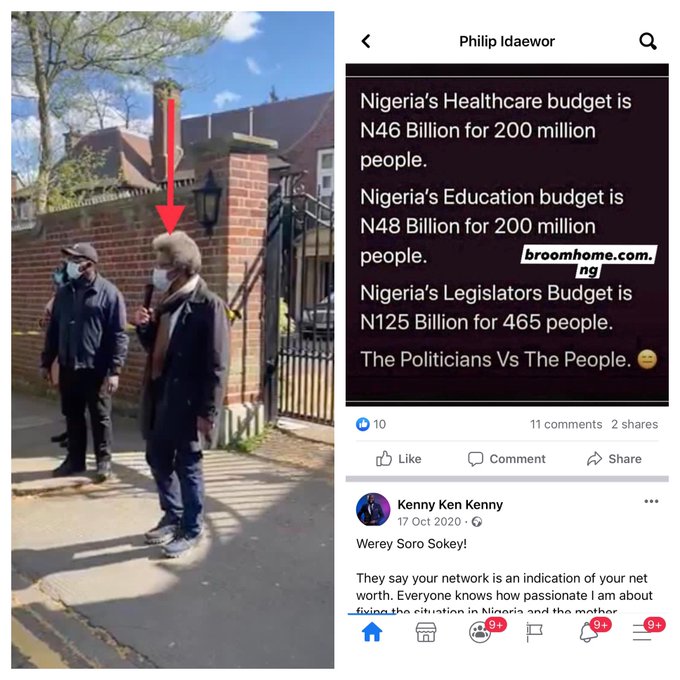 Disclosing the reason behind the emergence of pro-Buhari protesters in London, Reno Omokri on his twitter handle disclosed, that he will go ahead to disclose all calls and emails that was sent to him by Buhari men, who are calling him for negotiation, just as he refused to be paid, according to him he is not a bandit that negotiate.

Omokri also threatened to go ahead to release the doctor Buhari had gone to London to visit, his address and other information.

“Please tell General, @MBuhari, I am not prepared to negotiate his ransom so he can escape house arrest at Abuja House, London. He should ask his people to stop bothering me. You think I am like bandits? The ransom I need is for Buhari to return to Nigeria! #HarassBuhariOutofLondon,”Reno tweeted.

Nationalwatchng further gathered that the pro-Buhari protesters were allegedly promised to be paid £75 per head bribe by the presidency for the protest.

National Chairman of the Peoples Democratic Party (PDP),  Prince Uche Secondus-led National Working Committee (NWC), has been accused of mismanagement of N10bn generated from the sale of forms for four years.

The country’s anti-corruption agencies, EFCC and ICPC have been petitioned by one of the chieftains of the party over the matter.

The petitioner, Prince Kassim Afegbua, alleged that the leadership has mismanaged close to N10bn which accrued from the sale of nomination forms for the presidential, gubernatorial, house of assembly and senatorial elections from 2017 to date.

Responding to the petitioner, the National Publicity Secretary of the PDP, Kola Ologbondiyan, described the claim as “spurious” and “irresponsible”.

“The PDP did not raise Afegbua’s fictitious sum of N10 billion as alleged by him. For the avoidance of doubt, the PDP generated the sum of N4.6 billion and raised a budget for its expenditure, in line with all known financial regulations of our party.

“This budget passed through the organs of our party and received the approvals from the NWC, the governors’ forum, the Board of Trustees as well as other organs of the party.

“As a law-abiding political party that respects the doctrine of rule of law and transparency, the budget was presented to the National Executive Committee (NEC) where it also received a final approval,” the party stated.

The petitioner, in a statement, said, “Much of the financial transactions of the PDP under Prince Uche Secondus have been shrouded in mystery.”

He said in the event the anti-graft agency delayed in carrying out its investigation, he would have no option but to seek legal redress in the law court.

The apex Igbo socio-cultural organization, Ohanaeze Ndigbo, on Tuesday, urged the South-East Governors to without further delay enter into negotiations with angry youths in the zone.

This is coming on the heels of heightened tensions in the region, with unknown gunmen wreaking havoc on a daily basis across the five States in the zone.

Recall that in the weekend killing of Ikonso Don, the commander of the Indigenous People of Biafra, IPOB’s Eastern Security Network, ESN, has added to the tension in the zone, with the pro-Biafra group vowing to go all out for revenge.

In a statement made available to Daily Post, the Secretary-General of the Chidi-Ibeh led Ohanaeze Ndigbo, Mazi Okechukwu Isiguzoro said any delay in entering into a negotiation process with the youths would spell doom for the zone.

He said the rising insecurity in the zone was a product of age-long neglect of the youths by the political class, and unprovoked killing of agitators.

READ ALSO: People Are Reporting Killing Like It Had Never Happened Before – Garba Shehu

He recalled that, “there have been instances where security agencies opened fire on Biafra agitators where they are holding their meetings and nothing was done about it. That is where the problem started and we must address it from there.

“We have two challenges- the killer herdsmen who have been ravaging the land and nothing serious was done to checkmate them. Secondly, the neglect of the youths while politicians lived in affluence.

“However, we must all know that whatever is happening is to our own disadvantage and the enemies are happy that the South-East is burning.

“The Federal Government has also not implemented the promises it made during the EndSARS, especially with regards to financial compensation of victims. We also did not see much from them in the form of palliatives during the COVID-19 lockdown, so the youths are angry.

“Now, talking about the South-East Governors meeting on Sunday, they still missed the point. The people at the centre of it all- the youths, were not in any way represented during the meeting.

“What we are saying is that everybody should rise up to the occasion; the governors are trying but what is happening is beyond them and we have to help them.”

“The governors are even setting up committees without the youths, without their representatives. We are calling on the governors and other stakeholders to reach out to the youths, they should give what belongs to the youths to them. There is danger ahead and that danger can be averted now. If they fail to do so, it will not augur well for our people,” he warned.

The Head of the Economic and Financial Crimes Commission, EFCC,  has reminded Non-Governmental Organisations, NGOs and Civil Society Organisations, CSOs, that they have critical roles to play, in curbing money laundering and terrorism financing in Nigeria.

“The varied funding sources and the ability of NGOs and CSOs to process large amounts of cash to beneficiaries and regularly transmitting funds between jurisdictions make them prone to money laundering and financing of terrorism,” he said.

According to him, it is mandatory to report to the Special Control Unit against Money Laundering, SCUML, any transaction through any formal financial channels in excess of $10,000 and any cash donations in excess of $1,000.

“Failure to do this is punishable by the law,” he said.

Hounding The President. Will They Ever Learn? – Femi Adesina